I’m often telling folks that the goal of my visual anthropology class is not to make filmmakers, but to use basic equipment to have my students make films together with others…

For the past few years, students in my class have been working with local volunteers from our university neighborhood—The Hamline Midway—to make simple films together. During the first half of the semester they get to know one another, and the students get to learn the equipment, by making a series of short 5-minute “micro documentaries” mimicking the styles of 20th century documentaries. While examining the montage and reflexivity of Veritov’s Man With A Movie Camera (1922) to Flaherty’s emotionally powerful Nanook of the North, students work in basic silent black and white. Then they add narrated “voice of God” voice-over storytelling to a clip assigned in conjunction with the classic mid-century ethnographic films The Hunters (dir. John Marshall, 1953) and Dead Birds (dir. Robert Gardner, 1963). Finally, after watching the reflexive, cinéma vérité of Jean Rouch’s Chronicle of a Summer they shoot more carefully nuanced interview footage with synchronized sound. By midterm, they are then generally ready to work on more sophisticated group projects with neighbors that they generally know much better. The first year I tried this the class ended up with a short, simple documentary about our neighborhood, with a David MacDougall-inspired name—Midway Conversations.

As I mentioned above, however, my goal is not to make filmmakers, but to have students make simple films as a pedagogical tool to learn about making films and collaborating with others to do visual research. Central to this idea is that they must use simple equipment—basic cameras and digital audio recording equipment. Over time I have been gradually building “kits” of simple and cheap equipment that students can use for their work. Of course, from year to year the simplicity and availability of student-owned smart phones means that soon I imagine I might not even need much equipment at all—and maybe I’ll change the name of the class to something like “iPhone ethnography” or “Smartphone Ethnography.”

Following some recent coverage about the class in our local newspaper some folks have been asking me about what kind of equipment I have students use. So, I thought I’d post a quick summary of the mobile visual ethnography equipment that I have students use along with links and an explanation. 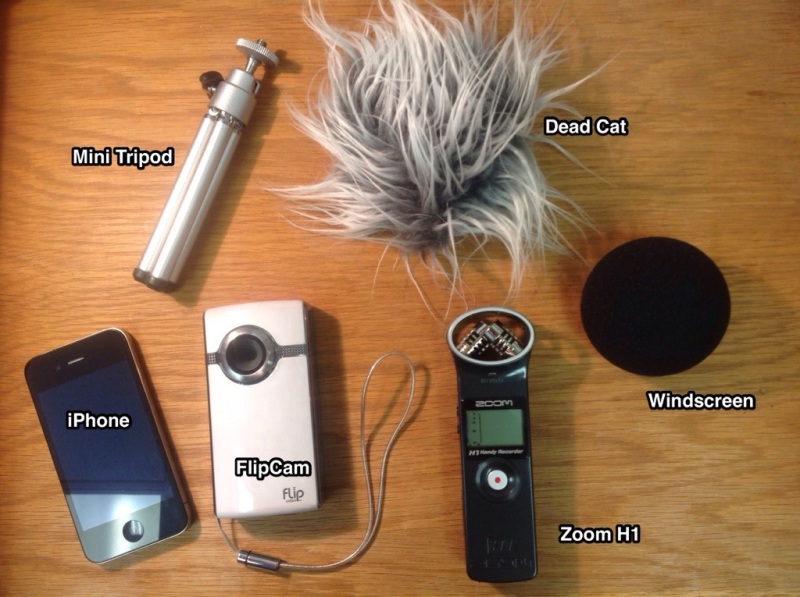 What we have here is some basic stuff:

Not pictured, of course, are the computers that we use—either the students’  own, or ones in our digital media lab. I encourage them to exclusively use iMovie for its simplicity and compatibility—leaving folks in class to focus on content and not getting bogged down by the technology.

Anyway, I hope this was a useful summary of the simple equipment that we use to learn about ethnographic filmmaking.