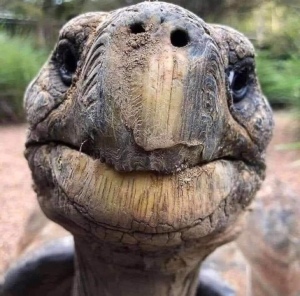 Johnathan the tortoise turned 188 yesterday. The oldest living land animal—his life has spanned the deaths of every animal on the planet. The world into which he was born is unimaginable to us except as fiction.

To put this in perspective, when he was born there were only 24 United States and the Civil War was still thirty years in the future. The last ship bringing enslaved people to the US wouldn’t set sail for another 28 years and the lands West of the Mississippi had native communities living across the landscape—the military conquest of the West was only just beginning. There were no typewriters or telegraphs, and of course no cameras or plastics. Steam locomotives were just starting to be manufactured in the US. In China, the the First Opium War was just about to start and Taiping Rebellion was still about twenty years in the future. In Europe Beethoven had only just died five years earlier. Karl Marx and Frederick Douglass were 14, Darwin and Lincoln were 23, Mendel and Pasteur were 10. The interior of Africa had not yet been colonized, as well as most of Australia.

The total world population when Jonathan was hatched was about half the current number of daily Facebook users in 2020.

Jonathan was twenty-five when the first oil well was drilled. His life extends to the dawn of the climate crisis. He is an animal from before the Anthropocene.