“I think of the hard work I have done and even more of all the waiting and boredom as not exactly irrelevant but as nothing more than a necessary prelude for chance to show its hand” (Taussig 2011:59).

Last night I finished reading Michael Taussig’s reflections on drawings in anthropological field notebooks (namely his) in his 2011 book, I Swear I Saw This: Drawings in Fieldwork Notebooks, Namely My Own (University of Chicago Press.) Similar to my experience with most of his books—going back at least as far as The Magic of the State—it was an enjoyable mix of commentary, observation and reflection that was though-provoking, infuriating, self-indulgent and magical. 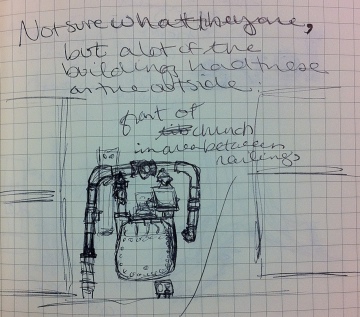 What are you? (Introduction to Anthropology, Fall 2013)

There are few anthropologists that I savor reading as much as Taussig, because his storytelling manages to evoke such a wide range of feelings and associations. His language is poetically evocative in ways that make me pause, consider and reread. I suppose I feel the same way about Roland Barthes, a comparison of which I imagine Taussig would probably approve.

Unfortunately now that I have an iPad next to my favorite reading chair, I have developed the habit of picking it up to read background information. This was a bad fit to this book, as every few chapters I somehow slipped into an overly-long “iPad digression” of discovery. When, for example, Taussig discussed Joan Didion’s essay on “On Keeping a Notebook,” I read quite a bit about Didion, then found the essay on line and read it, before returning. In this way the modest 151 page book actually took much longer to finish.

I don’t really have time or inclination to write a review here—I’m sure those are easy enough to find. I do, however, think that this modest and thought-provoking book would be an interesting addition to a seminar on ethnographic field methods. Drawings in field notes are under explored, yet an aspect of note taking that is part of what many of us do. Recently I began to emphasize sketching in weekly field notebooks in my Introduction to Anthropology class to very satisfying effect. This was, in fact, one of the reasons I finally got around to reading I Swear I Saw This. Taussing’s book would be fun to discuss because it is interesting to think with.

Before I put the book on my shelf—where it might sit for a few semesters before I get around to perhaps using it in class, I thought I’d jot a few quotes that I want to keep somewhere for possible use or reflection later. I have chosen to illustrate them with sketches from last semester’s Introduction to Anthropology class.

“Could it be that the photograph is implicitly assumed to be a magical way of capturing the sprit of the dead, while the drawing is understood to be but a timid approximation offering no more than a squint-eyed view of such that, unlike the photograph, it cannot so easily be appropriated for sympathetic magic? Something similar occurs with the use of drawings for courtroom reporting in the news media in the United States and elsewhere, the courtroom being a place where people swear to tell the truth and where photography but not drawing is prohibited” (12-13). 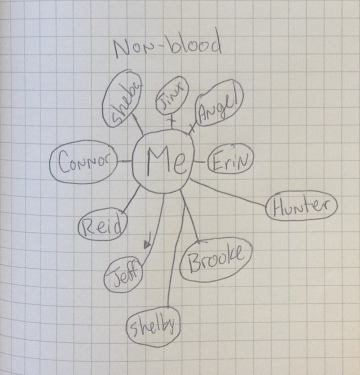 Me. (Introduction to Anthropology, Fall 2013)

“The drawings come across as fragments that are suggestive of a world beyond, a world that does not have to be explicitly recorded and is in fact all the more “complete” because it cannot be completed” (13).

“…photograph is a taking, the drawing a making…John Berger certainly things so, with this enigmatic notion that a photograph stops time, while drawing encompasses it…” (21).

“Not to put too fine a point on it, the notebook becomes not just the guardian of experience but its continuous revision as well, a peculiar and highly specialized organ of consciousness no less than an outrigger of the soul. It becomes an extension of oneself, if not more self than oneself. If a camera is a technical device that more often than not gets in the way—gets between me and people—the diary or fieldwork notebook is a technical device of a very different order and even more magical than the much-acclaimed magic of photography” (25).

“We amateurs feel little hesitation in speaking, although we are not professional speakers, just as we run, although we are not professional athletes, make love, swim, or email, et cetera. Most of us even live life amateurishly. But drawing, for the amateur? off limits. Drawing is precious in every sense of the word, except for the Littlies” (33-34).

“Much of anthropology , certainly most that is funded, thus turns out to be telling other people’s stories without realizing that’s what you are doing, and telling them badly, very badly indeed—because, like drawing, such stories are seen as mere steps toward the Greater Truth of the Abstraction” (49).

“This everydayness of the monstrous—not the monstrous itself—is a complicated state of being that comes easily unstuck. Instead of a gradual process whereby we adapt to the weird and the horrific and treat it as normal, the normality of the abnormal is a tensed combination of opposites, a split consciousness that unexpectedly veers off into scary territory when you least expect it, such as when for whatever strange concatenation of events, abject life hurls itself at you, and in wild disbelief you can only exclaim: I Swear I Saw This” (71).

“And that is how I regard drawings such as mine in my notebook—as play, to be contrasted with the text, which is work. Such drawings have no place in the anthropologists’ cannon. They are fun to do. They overstep. You are not meant to make silly drawings, let alone smoke and dance over the corpse. They re marginal at best, a retreat to childhood and therefore—from the perspective of Bataille—not merely products of caprice and innocence, but likely to be deadly serious and in face more serious—more sacred—than work could ever be” (73).

“Being drawn to draw, equivalent to singing, is what makes the difference between seeing and witnessing” (79).

At the Bar. On a napkin. (Introduction to Anthropology, Fall 2013)

“..the fieldwork diary is built upon a sense of failure—a foreboding sense that the writing is always inadequate to the experience it records. Nevertheless, on rereading by its author, the diary has the potential to bring forth a shadow text that can simulate the experience that gave birth to the diary entry, not only for what is said, but more likely for what is omitted yet exists in gestures between the words. This is what Barthes called the “role of the Phantom, of the Shadow” (100).

“…the notebook is actually an extension of oneself if not more self than oneself, like an entirely new organ alongside one’s heart and brain, to name but the more evocative organs of our inner self. What this new organ does is incorporate other worlds into one’s own. Is this not obvious when Benjamin himself states that the genuine collector’s object do not come alive in him, but rather it is he who lives in them?” (105).

“The notebook is enchanted as well as enchanting, at least from afar. The way it slips in and out of the Great Man’s pocket” (109).

“The notebook is like a magical object in a fairytale. It is a lot more than an object, as it inhabits and fills out hallowed ground between meditation and production. Truly, writing is a strange business” (112).

“The point is that a fieldworker’s diary is about experience in a field of strangeness” (120).

“More self than one’s self, this ancillary organ called the fieldwork notebook plots a course between chance and story” (137).

“What is more, fieldwork and hence its notebooks produce a knowing that is largely the result of stories and chance embedded in what could bed allied the “Stranger effect,” whereby the anthropologist observer is credited with mysterious power no less than with childlike ignorance and vulnerability. This mysterious pose is also connected to but not necessarily the same as that of the state or the occupying power or the upper classes or a white skin, no matter how much the anthropologist disapproves. But that is not all. Not by a long shot. The anthropologist is quintessentially a stranger in a foreign land asking for directions and, in the process, likely to be changed in some fundamental way” (144).

“As for the story-laden character of anthropological knowledge and hence its notebooks, is it not he ultimate betrayal to render stories as “information” and not as stories?” (145). 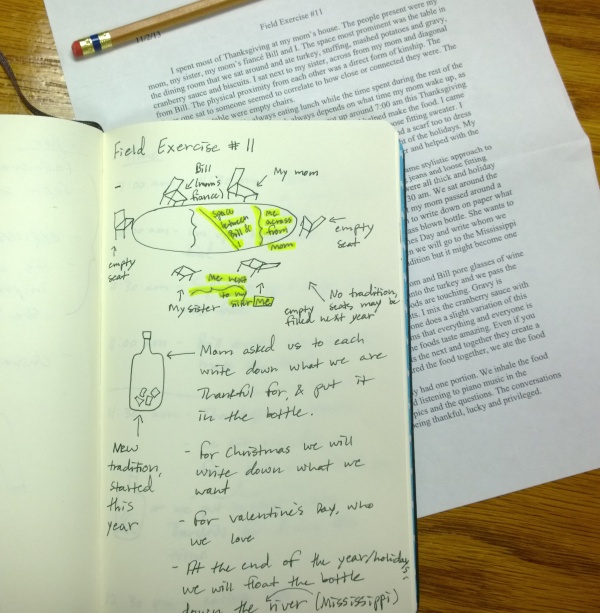