Remember the round fleshy people stuffed into chairs with sippy cups and video screens hovering just inches from their faces in Pixar’s 2008 film Wall-E? I had always assumed they were intended as critical commentary on an over-mediated consumer society, not as an actual product concept.

Evidently the designers over at Fisher-Price either didn’t see the film, or didn’t get the satire. There is no other explanation for the creation of The Newborn-to-Toddler Apptivity™ Seat for iPad® device—the unholy merging of a child seat and an iPad. Were it not an actual product, it would be a funny joke for an article in The Onion. Sadly, it is real and somehow I feel that its existence represents a kind of terminal point for product design, a nadir of market capitalism, perhaps even a harbinger of The End Times—the ultimate extreme of “the screen.” Now children can get screens from the very moment they begin to become socialized as humans. They will know apps at the same time as their parent’s faces. Momma. Dadda. Apple.

It’s a grow-with-me seat for baby that’s soothing, entertaining, and has a touch of technology, too. For newborns, it’s a deep, comfy seat that reclines to three different positions and has a soft head support.

Reading this description of the Apptivity™ chair on its website, evoked memories of scifi stories of my youth. Seriously. It actually said that the child can grow up in the seat being soothed and entertained. Get programmed. Or, as a colleague joked in reference to Aldous Huxley’s Brave New World, “I’m really awfully glad I’m a beta…”

What can such a device mean for the youngest children whose brains are still forming to be exposed to apps? What apps could possibly be made for toddlers and what will happen when the plasticity of their young minds develop in dialogue with a screen instead of a human? If “what fires together, wires together” then what happens to a newborn’s brain on apps?

If the duplicitous nature of corporate propaganda has ever been in doubt, one only need be reminded that this is a product designed and sold by a company which claims on its website:

Fisher-Price exists to make childhood fun and enriching.  Through our breadth of products and services, we support families with young children, helping them build skills that will last a lifetime.

Of course, I can’t imagine that the children of the rich and wealthy will be sticking their kids in these chairs. More likely these will be the last resort of the people in our society who need a bit of extra childcare, or well-intentioned parents who think sticking their child’s face inches from an iPad will give them a leg-up on their education. (As a professor, I’m already wondering what it will be like to have such children in the college classroom.)

I’m imagining humans with brains wired differently. Those wired by plenty of time, play, and interaction in the presence of caring humans, and those whose earliest experiences are sitting alone in a rocking chair staring into the digital abyss—their minds trying to wrap around a cold, inhuman iDevice.

We could call these Children of Siri the TouchToddlers™ or iChildren®. Then again, I’d better be careful. I just might give some corporate marketer a name for a new product. 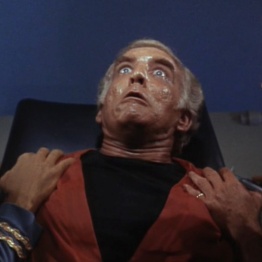 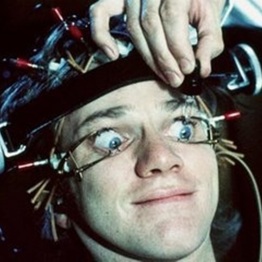 Alex gets the Ludovico technique in A Clockwork Orange (1971).

(Just in case Fisher-Price discontinues this insane product, here is a link to a PDF of the page—to prove it once existed.) 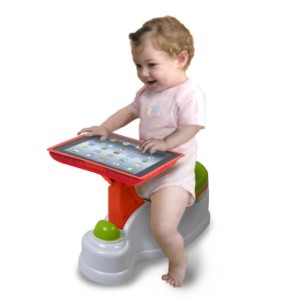 I few friends just made me aware of yet another contraption for parents who want to turn their kids over to an iDevice. The iPotty is marketed as “a comfortable and fun place to learn to use the potty.” I suppose iPhones and iPads have changed many adults’ relationship to their toilet time, so why not junior’s.

But seriously, what kind of craven marketing mind could brew up such a bullshit idea. Making little Paulie’s Poop time a moment to for him to be “playing apps, reading books or watching video clips.”

The reviews on Amazon are a fun read.