“How much have you been partying?”

I’m pretty impressed by a project at the University of Wisconsin at Madison, called Channel C. Apparently the brainchild of some Chinese students at UW, the “channel” is a series of short videos that discuss questions across the differences between Chinese students and mainstream American college life. Some topics include common stereotypes of Chinese students such as “Why Chinese Students Don’t Party?!”  while others are more concerned with pointing out the unquestioned assumptions of parochial Americans such as “Why Chinese Students Don’t Speak English?” Some of the videos deal with topics that might be sensitive or awkward to openly ask someone that wasn’t a good friend, but in video form they are easily accessible and some are even quite entertaining such as “Where’s Your Money From?” and “Chinese Names.”

I am impressed with the range of topics and issues that the videos address. I also appreciate that the videos are subtitled in both English and Chinese—potentially allowing both Chinese and American students to watch them together and discuss the contents. The idea of Channel C suggests some interesting use of video to capture cross-cultural conversations between students for use as discussion material. As I watched some of the videos I thought what it would have been like to make similar videos back when I was a foreign student in China—to discuss, explain and address everyday issues, misunderstandings and stereotypes that Chinese teachers and students had of us. It would have been fun, interesting and, at times, cathartic. In some of the Channel C videos I see a familiar dynamic—it must be really enjoyable for the students involved to address these issues.

“What do they think about Second Generation Rich Chinese students?”

Of course, Channel C—because it focuses exclusively on Chinese students—does have the effect of singling out this group, reifying and homogenizing it in opposition to “American” students in ways that can be uncritical. (And, those “American” students appear to be stereotypically “white.”) the video “Pretty Chinese Women,” for example, while interesting as a curiosity, attempts to assert “American” and “Chinese” tastes for attractiveness.

Some of the most interesting topics for me were the ones where the Chinese international students explore their own changing roles and identities in an American context and suggest more complex differences within and between the American students and Chinese students. Two of the most interesting deal with “Chineseness” in “American Born Chinese (ABC) & Fresh Off the Boat (FOB)” and class differences in “Who are the Chinese Second Generation Rich?” 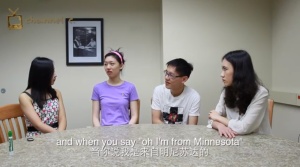 Overall, however, I really like the starting point and intentions of Channel C. As a professor I would even enjoy seeing some videos that engage teaching and learning in college. Is there space in this project for the students to discuss their experiences with American professors in the classroom?

I’d also like to see the project become even richer by bringing in international students from other parts of the world and widening and deepening the conversations around the issues it raises. “American” in most of the videos seems to be a stereotyped “white” American. This is an assumed category that could be usefully pulled apart by looking at class, race, gender and geography. I would, for example, have loved to see the episode on “second generation rich” be an open roundtable about education, class and globalization with a number of students, instead of a scripted report.

Channel C is very interesting and, at times, thought-provoking project. While watching some of the videos I couldn’t help wonder the extent to which this model could be used as part of an educational pedagogy in a structured classroom environment. I have liked them on Facebook and look forward to seeing their future work.