Something interesting happens when the linguistic sign gets the added value of being in another language. Language isn’t just the signifier/signified relationship of the word’s meaning, but also contains the added social value of the foreign language as it is read by others—no doubt indexing the owner’s global cosmopolitanism. Why tattoo “love” on your arm when you can tattoo amour or 愛? Love isn’t just the boring old “love” of English, but acquires the added bonus valence of French or the “artistic beauty” of the ideographic Chinese.

Of course the risk of messing with the partially or completely misunderstood exotic is the risk of loss and failure—viz. the scars of mistranslated, incorrect or wrecked tattoo “fails.” For years images of “failed” Chinese tattoos, for example, have circulated on the Internet—recording the misfortunes of people who have permanently marked themselves with symbols that don’t signify what they had intended. Hanzismatter was one of the first I remember seeing, but even a simple web search turns up a number of sites and articles such as Epic Chinese Tattoo Fails or 34 Ridiculous Chinese Character Tattoos. I often share with my students in class the story of seeing a dramatically intimidating punker at The Crocodile in Seattle many years ago who rolled up to the bar sporting what appeared to be a massive “革命” (revolution) tattooed in large characters on his throat and neck. I say appeared because I didn’t have the heart to tell him that it was upside down and backwards and done very poorly. Regardless, he probably would have kicked my ass if I had said anything at all.

Last week, however, was a watershed moment in the history of foreign-word translations—especially those of Chinese. The first confirmed sighting in the wild was made of a Chinese person with an English tattoo. The tattoo said simply “value” in English, with a small star next to it.

On one level it was reassuring that Americans are not the only ones to dabble in “the exotic” signification of foreign language tattoos. On another, however, I was really impressed by a tattoo’s play with meanings. The woman’s tattoo didn’t say anything specific in English—not “love” or “beauty” or “revolution” or a famous quote by a famous poet. It simply said value—the meaning of the word was a reference to the valuable surplus referent of the referent of the foreign language tattoo itself.

It was a tattoo so meta my head hurts.

UPDATE October 2017: “Everything will be Fine!” 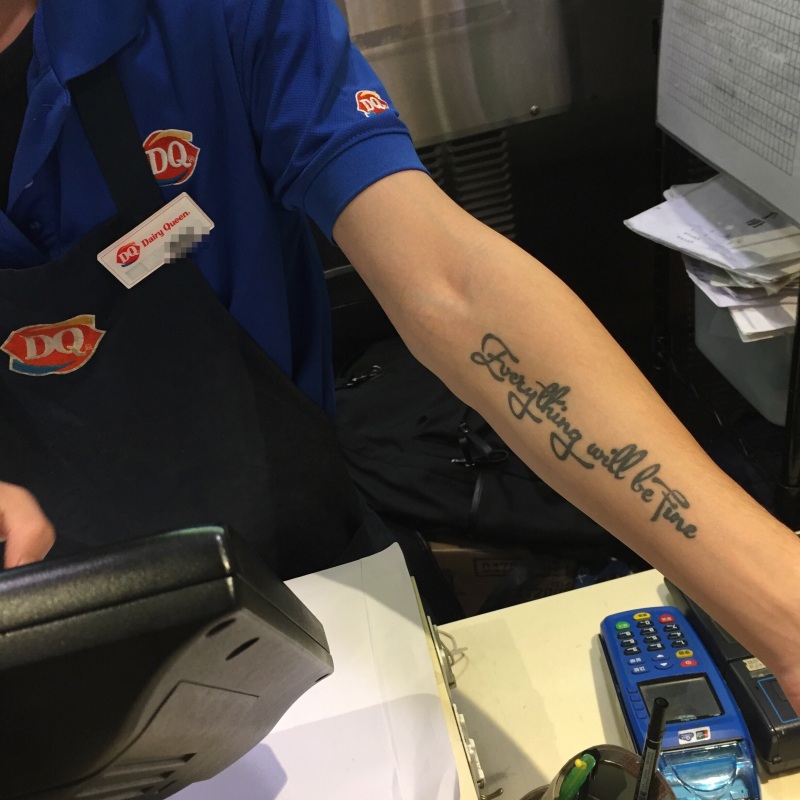