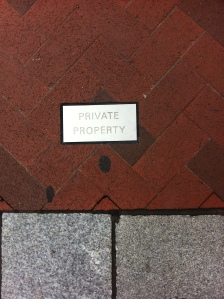 “I am letting you be here.”

Last week, while walking on the sidewalk up the street toward Market Square in Pittsburg, PA, I noticed a small brass plaque mounted in the brick sidewalk at the edge of the street at the corner of Forbes Ave and Delray Street. It simply said, PRIVATE PROPERTY.

The brass and brick made the simple message—about the size of a business card—seem proper or even classy. That it was written in all caps and even needed to be there in the first place, however, piqued my curiosity.

I assumed that the notice had been placed there following an event or in anticipation of one—something that requires evoking private property rights. The message wasn’t put there so people could escape from public space into private—more likely it was there so residents of Pittsburg don’t mistake the private sidewalk as public space. What had happened? What was the event? A brief Google search showed that Market Square had been a site of Occupy protests and the brick sidewalk did seem new. Could the plaques have been installed following those protests?

Inherent in the overt notification of such a posting is the unspoken message that anyone crossing into the private space is being “allowed” there by a power that can revoke that invitation at any time. It was not immediately clear, however, whose property it was. It was certainly not clear when, how, or under what conditions the specific nature of the special space would, could or might be enforced. Could I stand there? Could I stand there in a gorilla suit? What if a dozen people stand there—in gorilla suits? If I sat down would someone come to tell me to move? What if I sat there for 15 minutes? An hour? A day? As I continued walking down the street toward Market Square I was left to wonder.

Whatever decision-making process resulted in the tidy brass notifications they clearly intended to communicate a curt message in as polite a way as possible. Certainly big yellow signs with black lettering would have sent a different message and they would have been no less true. 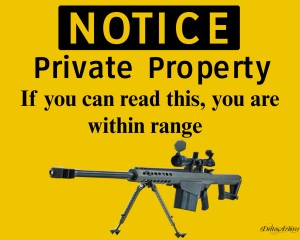 “You are in our sights.”