“I have been here before.”

During our drive through Gary, Indiana we pulled over in front of the dilapidated and boarded up remains of what had once been a supermarket. Standing in the fractured, concrete-and-weed parking lot, facing the building, with its faded paint and busted-out window frames, the strongest sense of déjà vu hit me.

I had been there before.

I knew what the inside of the store looked like with its dark rows of rusted, toppled shelves and trash-covered floors. When I was thirsty, hadn’t I once visited the store and found a few cans of Coke still inside one of the busted up vending machines just beyond the front door?

After pausing to snap a few photos, I jumped back in the car and drove off. As I drove on I considered my experience of déjà vu—my memories of having been to a supermarket in a town I had never visited.

Then I realized where I had seen that supermarket.

This past March, toward the end of Spring Break, I had spent an hour or so wandering around a supermarket just like the one I had seen in Gary, on a quest to find some things—medical supplies and Colas. The market I remembered exploring was not, however, the one I had visited in Gary.

It was the Super-Duper Mart from the award winning post-apocalyptic video game, Fallout 3.

“I have been here before.”

What does it mean to have an experience of game-mediated, post-apocalyptic déjà vu in a real American city?

I wasn’t prepared for the kind of economic and physical devastation that we witnessed on our recent road trip through towns of the post-industrial American Rust Belt. The withered and decaying cities and towns couldn’t cut a sharper contrast with the vibrancy and growth of Chinese factory towns, with which I am much more familiar.

I had no previous experience to which I could compare what we saw in places like Gary. I have visited poor pockets of large cities—neighborhoods or areas that have been ghettoized and neglected while the wealthy move to cluster together creating more affluent spaces. In the case of Gary, however, I had no precedent for seeing so many burned out and boarded up shops and homes. Entire city blocks laid to waste. Local schools boarded up and forgotten. In many areas the skeletal remains of structures were overgrown like ancient ruins. It was so overwhelming and on such a city-wide scale that I gave up even trying to take any photos. We just drove around and tried to make sense of what we were looking at.

Sure, there were signs of life. The wasteland of Gary’s downtown area was punctuated by small struggling local shops—a wig store, a local BBQ restaurant, the occasional dollar store or chain fast food restaurant. We drove through some small neighborhoods with some well-kept streets and lawns. People are living in Gary and they are clearly working with what what is left. There is even a prosperous pocket on the shore of Lake Michigan cut off from the rest of the city by a conveniently placed national park. These, however, were small encampments—vestigial remnants—within the space of a city that had once clearly been larger and more prosperous. Judging from the billboards that lined the local highway, the only growth industries were personal injury lawyers and adult superstores.

It isn’t much of a stretch to say that many post-industrial American cities we visited on our trip are zombified, “walking dead”. Born as factory towns and then killed by the factory’s downsizing, closure or move overseas, many remain animated, consuming simply with very little of the vibrancy, diversity and variety of economic and social activity of a healthy economy. OK, that is a bit of an overstatement that doesn’t acknowledge the work locals are doing to keep their communities going and the ways that Gary connects to the larger regional and national economy. Nevertheless, the extent to which cities like Gary have shrunk and withered—reducing the options and opportunities for the people who remain—it doesn’t seem that much of an exaggeration. Gary now appears reduced to post-disaster economy that verges on the science-fictional—with bands of surviving humans eking out an existence any way they can.

I have honestly never seen anything like Gary anywhere in the US and the experience of visiting was shocking and disorienting—disorienting to be in such an unfamiliar place in one’s “own country.” I really did experience Gary as an “other America.” While driving around, I could only compare the ravaged cityscape to the kind of images I have seen in fictional post-apocalyptic dramas like Mad Max, or the Walking Dead.

And, it seems from my moment of déjà vu, the expereinces of video games. 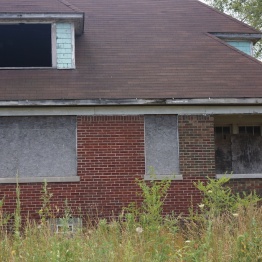