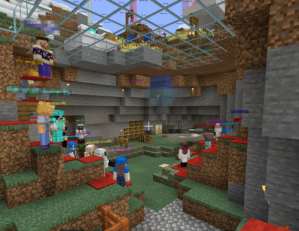 This week, digital anthropology started with a few kinks to work out. Most importantly I needed to figure out how to free my class from various forms of entrapment and entombment in The Nether, and then get us all back to our cave classroom in The Overworld. On Tuesday I ran the first part of class on Zoom so that we could get through the discussion and content that I had planned in the syllabus. At the end of class, however, I set aside some time to jump into Minecraft and get everyone back together. While it didn’t go entirely as planned, in the end I had to switch Minecraft into survival mode and ask each student in class to have their avatar jump in lava or allow themselves to suffocate in rock so that they could be respawn anew in the Overworld. Given the strong injunction against all forms of violence or even references to violence in American educational settings, it really seemed weird to me to direct my students to virtually die so that we could be reunited. By the end of class, however, we succeeded in getting back together.

As I mentioned in my previous post, this experiment really does feel similar to studying abroad. When abroad with students in an unfamiliar place, the new environment hits everyone where they are. Folks come to the experience with different competencies and one-by-one folks get acclimated in their own way. As instructor, these past few class periods I’ve had to really force myself to relax and be more flexible. Typically I run a pretty tight operation with detailed syllabi and a very set sense of what I want to accomplish in each class. While I encourage some deviations from that plan, I am vigilant in not letting things get too far from my plan. Our Minecraft experiment has upended that by occasionally pushing me into a place where I’m sometimes only in marginal control or left with things just falling apart. I’ve needed to be patient, open to success, and willing to fail pretty publicly in front of my class. Despite the class being virtual, it is strange how the whole thing is so much more challenging than a regular class would be because we are trying something so novel. I really do enjoy the problem-solving aspect of this and it seems that the class shares a sense of the adventure of trying something new together. 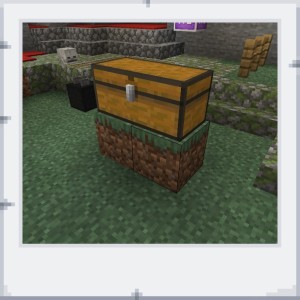 In fact, much of the goal of the first weeks of class is exploring the connections of the virtual and the actual and thinking about the nature of the things we do across the various digital platforms. We began thinking broadly about the deep time of media and the human-non-human assemblages in which we are enmeshed and the plan for Thursday was to begin examining what we could call the the ontology of digital things. What are the things that we experience through our digital devices? Are those virtual things “things” in the same what that physical things are things in our in the actual world? How, for example, is a virtual treasure chest of ones and zeros patterned to appear in Minecraft like or unlike a treasure chest fashioned of physical iron and wood? To do this we also dug into the implications laid out in Andrew Reinhard’s fascinating book Archeogaming: An Introduction to Archaeology in and of Video Games (and the archeogaming website). If archaeology of physical objects in a site underground is unproblematically dealing with real objects, then inasmuch as we can think of an archaeology in digital spaces we must be dealing with digital objects, right?

It seems to me that some of these issues are more abstract when we are dealing with a world designed by someone we don’t know, versus a world that we have had a hand in partially building ourselves. So I set aside some time in class for students to discuss and work together—building and interacting. To do this I asked them to return to the sites that they built together last week. Now that Zoom has a new breakout room feature that allows participants to “walk in” to preexisting breakout groups, it was easy enough for me to simply open eight breakout rooms and then assign one to each of the eight groups that existed last week. The students could then join the zoom group as they approached the building site. I set a timer for 15 minutes, the students jumped into their zoom groups groups and got to work. While they were in groups in Minecraft I used the interface in Classroom Mode to communicate with them in-world as they worked. It all worked like a charm.

While I don’t have time right now to complete the longer post that this deserves, even at this early stage, however, three interesting themes emerged from our conversations this week. First, it is clear that the world we share in Minecraft is another place and that being there together is having an interesting effect on our class. Many students report an awareness of their avatars in Minecraft that extend the presence of their faces on Zoom in interesting ways. One student said that he felt he couldn’t switch off his zoom camera and get up to do things around his room because he didn’t want to leave his avatar alone in Minecraft. The presence of the avatar required attention inward or it would just stand there. Similarly, another student reported that they were embarrassed when they just “flew across the classroom”—an inappropriate behavior in a physical space that they carried over into Minecraft. Of course, we haven’t established norms for classroom behavior in Minecraft that restrict flying, so this was a case of identifying with the avatar and then internalizing the “eyes” of the other avatars in the virtual classroom. All fascinating stuff we discussed in class.

A second thing is the theme of doing things together. Many people commented on the feeling they have of being together in another place working together making things. While discussions are, in a sense, making a conversation, much of that content is carried via Zoom audio and video. Working in a group to quickly cobble together a virtual hut, throw some. flowers on the ground while talking and then going “inside” to have a breakout group appears to do something different. The act of building together connects the groups in a qualitatively different way. They make a site for their activity. This is a novel thing for a classroom—or at least a college classroom. I asked them if it was too distracting and only one offered that people making things “flying around” was confusing. For most, it seemed there was a combination of building and conversing. I’m not sure how effective this will be, but we will see.

Finally, I think it’s important to mention the aesthetic experience of being in Minecraft. It is a beautiful environment that brings with it a set of feelings of warmth, freedom of movement and a dose of wonder because the landscape stretches out into the unknown. It contains the comforts of small spaces that Gaston Bachelard writes about in the Poetics of Space and at the same time the pleasures and promise of control that come along with miniatures that Susan Stewart examines in her fantastic book On Longing.

At this point Minecraft adds things to our class. Although we have also been having quite a few challenges with staying connected, dealing with lag and figuring out the best balance. At this point, however, it seems that the class shares the excitement of continuing our adventure. 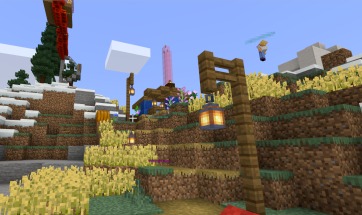 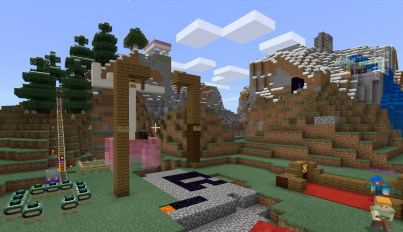