A few days ago I was walking out of the subway station, when I became aware of a giant, dark blue bag in my field of vision. The bag was on the back of a person a few steps higher up the stairs, so it was directly in front of my face. For a few seconds I could see nothing else but the cheap piece of luggage—ubiquitous on trains and long-distance busses throughout China. The 1970’s-style font, with an image of a small airplane and accompanying “translation” in pinyin, read:

I say “translation” because I interpreted the use of the pinyin romanization of the Chinese characters as a kind of global cosmopolitan gesture—evoking the lingustic differences of travel. Certainly the bag’s Chinese owner doesn’t need pinyin to understand the Chinese characters—but it might be useful for others one encounters in the international contexts of tourism.

The size that the bag advertises—EXTRA LARGE—evokes the fact that the journey will be a big one and for a big journey one needs a big bag.

As the luggage walked a few more steps up the stairway, its owner began to come into view. A modestly-sized man, his head barely peaking out from the top of the bag was slowly working it up the stairs on his shoulders. His labor and his worn clothes—and the modest mode of public transportation he chose—could not have cut a sharper contrast to the comfort and speed of flying, or the superlatives of the EXTRA LARGE or the promise of leisure in those characters: China Tourism. 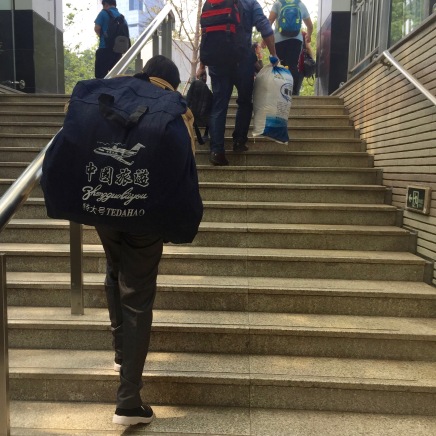 A few steps further up ahead, his fellow traveler—a portion of personal belongings stuffed into a fertilizer bag grasped in his right hand—completed the context. These two and the others ahead of them were not, in fact, tourists of the leisure-kind, but migrant laborers.

The laborer’s tourist bag, however, got me to consider for a moment the ways in which migrant laborers might be considered as tourists—seeing new things, experiencing new daily rhythms, itinerant, translocal and subject to contexts intent on extracting value from their movement. To what extent might migrants see themselves as tourists—geared up for movement, collecting value in a new place, experiencing the difference of urban life and narrating their journey through a story of displacement that is brought home at the holidays?

Turning this on image on its head, might the ubiquitous backpack with its hayseed fonts and aspirations to jet-age cosmopolitanism offer the beginnings of a critique of the tourist?