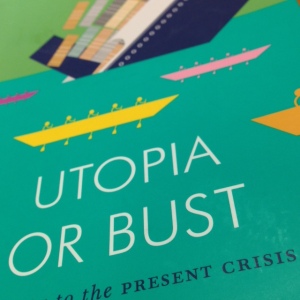 This past December Verso had an incredible book sale—50% off everything and digital books at a fraction of their list price. To top it off, they did something that I wish every bookseller did—buy the book and get the digital book for free. The sale provided the excuse I needed to catch up on books I have been eager to read, such as Gabriella Coleman’s, Hacker, Hoaxer, Whistleblower, Spy: The Many Faces of Anonymous.

While browsing, however, I also picked up some books that I had never heard of including a slim little volume by Benjamin Kunkel titled, Utopia or Bust: A guide to the Present Crisis (2014). It was an impulse buy, really. I judged the book partially by its cover—colorful lifeboats filled with hardworking survivors rowing away from a sinking container ship. Promising engagement with some pretty big names—Harvey, Jameson, Graeber, Zizek and others—it was quite a deal for the price of a couple of cups of coffee.

The book arrived last week and on Friday morning at four a.m. while trying to deal with nasty jet lag (I had returned from Cambodia a day-and-a-half earlier) I casually picked Kunkel’s book up thinking I might while away an hour or two. In the event it bored me to sleep, all the better.

I was very mistaken. Once I started reading, I couldn’t put the book down. I read half of it in that first sitting, took a brief nap and then promptly finished it. While I don’t have time for a full review here, I thought I’d take a little time to make a couple of comments while the book is fresh in my mind.

“Capitalism is after all not the worst conceivable form of economic organization; the point is to ask whether something better and less ecologically fatal may succeed it, and what that might be” (Kunkel (2014:16)

Utopia or Bust is a lucid and accessible introduction to some of the most engaging writers on our present economic crisis. Each chapter is a stand-alone essay in which Kunkel takes up the thinkers’ main arguments and perspectives. His prose is clear and the examples are vivid and engaging—bringing out the most compelling and salient aspects of the arguments in a way that makes them matter. He not only summarizes and connects some pretty difficult concepts to the present moment, but his urgent prose pushes forward to the next point and the next point and the next. It is a nice read.

The first four chapters are by far the strongest—perhaps because those authors present such fully-formed and compelling perspectives. The chapter on David Harvey takes up arguments from The Limits to Capital (2007) and The Enigma of Capital (2011) Kunkel provides particularly accessible commentary on Harvey’s discussion of the over accumulation of capital, the contradictions between capital’s need for profit, labor’s productive capacity and the need for markets to have consumers with wages to purchase surplus products. The summary of Harvey’s theory of rent and the need for debt to create purchasing power among workers who have insufficient wages in an over-productive system is very engaging.

Chapter two, pulls out some interesting observations from Fredric Jameson’s rich oeuvre—particularly taking moments from Valences of the Dialectic (2010) and putting them in the context of earlier work such as The Political Unconscious (1981) and Postmodernism, Or, the Cultural Logic of Late Capitalism (1992). While lauding Jameson for his inclusive ability to address “some aspect of the truth in virtually any body of work he’s discussed” and his rich engagement with culture as a “terrain of battle,” Kunkel critiques Jameson for being relatively thin in his economic discussions. Nevertheless, he relies on Jameson for some of the most engaging and thought provoking commentary on class, theory, globalization and the environmental effects of the anthropocene. Working as I do in a Midwestern liberal arts college I particularly enjoyed a quote Jameson offers about theory and social class that is just too good not to share here. Kunkel (2014: 63) writes,

“What is socially offensive about ‘theoretical’ texts like my own,” [Jameson] said in an interview, is “not their inherent difficulty, but rather the signals of higher education, that is, of class privilege, which they emit.”

Among some of the more interesting parts of the third chapter on the work of Robert Brenner, is a summary of his critique of the idea of a wage-induced profit squeeze presented in Economics of Global Turbulence (2006). Specifically Brenner’s argument that global manufacturing puts pressure on profits which reduces investment—where companies accept below average rates of return rather than close up their factories. This reduced profitably pushes firms toward financial speculation instead of manufacturing in their quest for profits. Included in this is the observation that workers who produce for the globe are not the consumers of those products and the consumers are financing those purchases with debts.

“Global prosperity will come about now through further concessions from labor, or the elimination of industrial overcapacity by widespread bankruptcy, but through the development of societies in which people can afford to consumer more of what they produce, and produce more with the entire labor force at work” (Kunkel 2014:98).

Perhaps the most valuable chapter in the book is Kunkel’s summary and discussion of David Graeber’s thick tome, Debt: The First 5,000 Years (2011). Among the issues he discusses are Graeber’s insistence that money emerged as a unit of account and not as a unit of exchange. He also summarizes Greaber’s observation that money is a reification of a social compact and be easily dissolved but is maintained only by force—debt is “a promise corrupted by both math and violence” (116).

One comes away from the first four chapters with a concise and easily digestible summary of some of the central contradictions of capital and labor, profit and debt and production and over production. Included in this is a sense of the way these contradictions are fortified and exacerbated by neoliberal “globalization” as both an economic and cultural project leading to the financial crisis of late 2008. I suppose this is why the final two chapters dealing with Slavoj Zizek and Boris Groys seemed a rough fit—not really continuing the inertia established in the first part of the book—and only touching very briefly on the topic of communism, utopian thinking and the cultural/historical legacy of Stalinism.

Fortunately, Benjamin Kunkel wraps things up with a concise “Guide for Further Reading” with plenty of great suggestions for moving beyond his excellent introduction. Tellingly—given the strengths of his book—the books he most clearly recommends for further reading are those that figure so strongly in the first four chapters of his book: Harvey’s Limits of Capital, Brenner’s Economics of Global Turbulence and Graeber’s Debt: The First 5,000 Years. To this he adds Jameson’s The Cultural Turn (1998).

These are just some quick comments about Utopia or Bust. I wish I had more time to provide more detail, but our semester begins on Wednesday and I have some syllabi to finish! I can however, conclude by saying that Kunkel’s book not only fulfills its promise of being a “guide to the present crisis” but does so in an accessible and compelling way. The book might be an excellent choice to include in a class on globalization. I’m considering it for next fall.