For folks in the Twin Cities the last weeks of August leading up to Labor Day is the time for the “Great Minnesota Get Together”—The Minnesota State Fair. Perhaps on of the only rituals truly shared by a large diverse cross section of Minnesotans, the fair hosts hundreds of thousands of people from a wide variety of backgrounds. It brings together rural and urban, old and young, people of different ethnic and cultural groups, new immigrants and old. It is a late-summer festival where Minnesotans communally bid farewell to the summer, prepare for the school year, the coming fall, and the battening down of hatches for the frosty winter.

I think it is reasonable to say the fair is a ritual of Minnesota heritage.

This year the “destruction of heritage” was controversial as the State Fair announced it might be the end of Heritage Square—which is slated for demolition and renovation to make a transit hub.

While walking through Heritage Square—past the “wild west” imagery, colonial-fort-style architecture and other references to “pioneer days.” I was impressed by the dated—mid-20th century version of history it presented. The Heritage of heritage square was not far from that of the “cowboys and indians” of the Lone Ranger days.

In a lightly traveled back area of the square, behind a row of shops was a truck trailer packed with memorabilia from the carnival association. Inside were photos of past chairmen {sic} and faded images from memorable events in the fair’s history.

Along the stairs leading into the trailer was an advertisement for an “Oriental Torture Cabinet”—complete with the image of a bikini-clad woman chained and threatened by half a dozen swords and sabers.

The advertisement evoked the history of a fair quite different from its contemporary form. The earliest fairs were traveling shows which entertained through the collection and display of uncommon “freaks and oddities” of nature, of colonial collecting, and of orientalist fantasy. They defined the power and privilege of a “normal” audience through their display of the uncommon and the unlikely, of conquered peoples and collected objects from the cultural margins.

Today’s fair is primarily an experience of shared consumption—eating, walking, looking, buying. Every year new outlandish oddities appear at the fair—unlikely culinary combinations of high calorie foods in freakish quantities. A deep fried Twinkie. Fat Bacon. A bin of cookies. All the milk you can drink. These freakish foods are, perhaps, the vestigial reminder of the fair’s earliest ancestors. 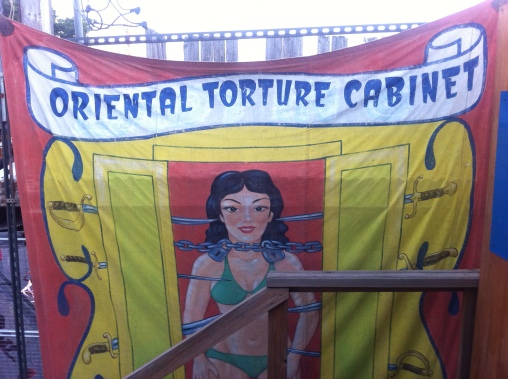