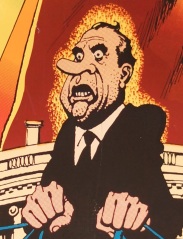 If he were still alive, today would have been Richard Nixon’s 100th birthday. No doubt because anniversaries make for easy news stories, I have already heard more than a few mentions in the media of Nixon’s legacy. The Vietnam War. The rapprochement with Mao’s China. Was he a war time president? What was his legacy? (Interestingly, I have heard no mention at all of one very influential event of his presidency—the decision to abandon the gold standard in August of 1971.)

Of course, I was a bit too young to remember all of the details. To me, the Nixon era evokes one singular image above all others—a day-glo poster hung on the wall in my grandparents basement in Austin, Minnesota. As I remember it most clearly, it hung in the “rec room” just above the folding card table where my grandparents often put together puzzles.

The poster featured a worried Nixon holding the reins of a pack of multicolored “dogs” with human heads. Behind him the Whitehouse crumbles as a blindfolded lady justice with her scales and book of law approaches—radiating trippy red and yellow neon light. Around each of the dog’s necks was a chain collar with their names: Dean, Erlichman, Haldeman, Mitchell, Magruder, and Mc Cord.

A few years ago, when we moved my grandmother out of her home into an assisted-living facility I somehow came into possession of the poster. It has been sitting in my basement waiting for the day I frame it.

Since today is Nixon’s 100th, I figure I might as well post an image of it here and share it with anyone who is interested. It somehow seems like a very fitting image of our first post-modern president. Now if I can just find a black light somewhere to try it out…