In an interesting video posted this past Friday, Mitt Romney describes a Chinese factory he visited back in his days at Bain Capital. The video was posted on YouTube by someone apparently pretending to be Rachel Maddow of MSNBC with the sensational title, “Mitt Romney admits to using Chinese slave labor at Bain.” Regardless of the source, however, the footage appears to be legitimately from the mouth of Mitt. The short two-minute clip reveals some interesting assumptions about China, globalized labor, and the miscommunications of our current political moment. Here is the video:

[**UPDATE: This is a copy of the original video that I have saved. The original was removed on Aug 26, 2012 when the account to which it was associated was terminated.]

The person who posted this video offers no context other than what we see, Romney’s spoken words, and the subtitles. The credits tell us it was filmed “in a private mansion…at a $50,000 per plate fundraiser.” Shot in the genre of the “hidden camera,” the footage is described by websites that link to it as an “exposé” or “a leaked video,” implying that it reveals a hidden and unpolished truth. And this “truth,” as implied by the video’s title, is that Romney is describing a visit to a factory filled with female slave laborers.

This, however, is a misrepresentation.

Romney is not describing a “slave factory,” but working conditions that are quite common in China. Factories just like the one Romney describes make most of the “Made in China” products that American’s consume across the political spectrum.The conditions are so common, in fact, that members of Romney’s audience express familiarity with them. If there is a hidden truth revealed by this video, it is a common truth that we all share.

What I find interesting about this video is that the same factory and the same workers are rhetorically invoked—spoken for—to make two entirely different points in two entirely different political contexts. Romney’s rhetorical “other”—a mass of young, unmarried, hard working, low paid, girls packed twelve to a room in a factory surrounded by barbed wire—is invoked to make a point about how great it is to be American. These same women to person who posted this video and others, become “female Chinese slave workers” that presumably prove that Romney is an “evil capitalist.”

Of course, both of these readings are dependent on a misreading of the description of the Chinese factory Romney offers. Barbed wire, for example, can be read as keeping people in, or keeping people out. Twelve people to a room can be read as unfortunate or unconscionable. Young female workers working long hours can be read as hard work or inhumane. I’m not judging the conditions of a factory that I have never visited, but the description Romney offers looks very different when one realizes that in China is is common for college students to live six to eight to a dorm room, and it is not unusual for buildings to be surrounded by high walls topped with razor wire or spiky shards of broken glass. For years I have taken my undergraduate students to tour factories that manufacture products for Target and Walmart that are not substantially different from what Romney describes. Again, I’m not saying I support these things—just that their presence does not necessarily indicate that one is talking about a “sweatshop”, not to mention “slave labor.”

A number of sociologists, anthropologists and journalists have described and examined the nature of light manufacturing in China—the reasons female labor is desirable, the relationships of laboring women to their bosses and their families—so there is no need for a summary here. There are even good films such as Mardi Gras: Made in China and Last Train Home that provide a useful, basic context for understanding gender and labor in China. The person who posted this video does a great disservice by exaggerating its contents and pretending to post it in the name of Rachel Maddow. Why is it necessary to misrepresent and lie? Why can’t a less sensational truth be much more profound? 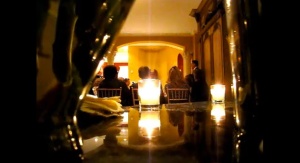 Ironically everyone involved—the “hidden camera” cameraperson, the fake Rachel Maddow poster, Mitt Romney, the folks in the audience, and most of the folks who have viewed the video on YouTube—all own or are wearing products made in factories not to different from what Romney describes. It is unfair. It is exploitive. It is also what globalized capitalism has created. And, it doesn’t need to be something as sensational as “slavery” to be worth talking about.

While I suppose I can understand and sympathize with a well-intentioned activist who is unfamiliar with production in China, misreading and misunderstanding its contents. When I first saw this video I found it fascinating for an entirely different reason than I assume the person who posted it did: I can’t understand how Mitt Romney—a presidential candidate—can stand in a room full of wealthy donors, many of whom are probably business people, tell the story he does, and fail to see its blatant contradictions.

Romney begins his story by reminding everyone in the room how great it is to be American—where “95% of life is set up for you if you were born in this country.” While the definition of “set up” and the rhetorical statistic of 95% are vague, certainly for the folks in his audience there is no argument here. I’m sure that 95% of the people in that room are of a social class where they were “set up” at birth. Even if we take “set up” simply to mean the basics of access to clean air and water, a less likelihood of starving, access to education and even minimal social welfare, and a life expectancy well above the global average, then Romney is not lying. To be born American is to be well off globally.

To support his point, however, Romney contrasts the life of the “set up” American, with the lives of Chinese women workers he observed working in huge factories making small appliances “for a pittance.” It is a world, furthermore, where he imagines people are so eager for the opportunity to work that factory owners need barbed wire to keep them out of factories. The moral of Romney’s vignette, as told by the Bain Partner was:

“…you know, 95% of life is settled if you are born in America. This is an amazing land, and what we have is unique and fortunately it is so special we are sharing it with the world.”

Giving the benefit of the doubt to Romney, I assume that he was trying to contrast poor living conditions (12 girls to a room!), unfair labor practices (low wages!), and the lack of opportunity (people waiting for jobs!) in China with the “amazing,” “special,” and “unique” joys of life in the United States. He also reveals the evangelical impulse of a contemporary American global capitalism that sees investment and global production as “sharing something special” with the world. I think Romney sees his story as one of “wealth and opportunity”—a parable of how great America is.

As I see it, nothing could be further from the truth.

Romney entirely misses the real moral of his story. He has just told us a story that illustrates two sides of the same unequal process. The women in that Chinese factory work making products for the global market. Their labor at “the China price” has made it possible for Americans to maintain a high standard of living despite falling real wages. Americans enjoy larger houses purchased with low-interest loans. We have less environmental pollution and are drowning in so many cheap products that some people have to rent mobile storage units to keep it all. If 95% of life for someone born in America is “settled,” as Romney asserts, then it is because we benefit from the fundamental inequality of the global production system.

Those women in that Chinese factory work for us.

Of course, by saying this, I don’t mean to simply lay a guilt trip on average American consumers. In spite of what many seem to think, consuming is not like voting—consumer choices don’t affect global economic policy the way that politics does. Simply blaming the misplaced desires of consumers won’t get us very far. The responsibility gets disproportionally larger going up the chain—making corporations and governments much more responsible than an average American worker trying to save a few bucks by buying cheap stuff at Walmart. Romney and Bain were, after all, buying the factory. They could have paid higher wages and offered a better package to their workers. As a powerful global company they could also, potentially, have more influence on local Chinese government officials to enforce China’s national labor standards. They could also reject the logic of the China price entirely by keeping some jobs back for their fellow Americans back in the United States. Perhaps this did happen. Romney doesn’t share these details. But, why do I doubt it?

Most importantly, however, Romney fails to recognize that his own spectacular wealth and the wealth, I am sure, of others in that room comes from accumulating the difference between those women “working for a pittance” in China and what Americans who buy those appliances pay to low cost retailers back in the US.

What this video shows is much less sensational than an admission of slave labor. What it does expose, however, I find more profoundly disturbing for different reasons. The hidden camera reveals the simple worldview of a powerful and very wealthy man among powerful and wealthy people who isn’t aware of what he is actually saying. It appears that behind words like “amazing” and “unique” and “special,” Romney has a very empty notion of what America is and how it relates to the rest of the world. While Mitt no doubt knows much about turning a profit, it appears that he doesn’t have a clue about the fundamental inequalities of the global economy or have any moral vision that can see the lives of those people in China as linked to ours.