“Tens, hundreds of simultaneous actions, micro-events, each one of which necessitate postures, movement, specific expenditures of energy…”

This summer I have spent a good amount of time reading widely, and even somewhat randomly, books that examine the sociocultural in a poetic or literary way. I have been searching for an ethnographic approach to rethink and rewrite my research on social memory and nostalgia in a way that addresses the contingent, contradictory, emergent and affective nature of memories both individual and collective. I began by revisiting some books from my grad school days by Michael Taussig, José Limón and Kathleen Stewart and then moved to more recent work. Among the books on my reading list, I was most impressed by the style and approach of Stewart’s newer book Ordinary Affects. In fact, I think if I had the great prose writing skills she has I would seek to mimic Stewart’s approach—an ideal one for telling the evocative and partial stories of memory. Her book was a pleasure to read and I finished it wanting to read more.

One of the books I read early last month, made a passing reference to a book titled An Attempt at Exhausting a Place in Paris by Georges Perec. I had never heard of the book or the author, but for whatever reason it sounded interesting, so I requested a copy through interlibrary loan. It arrived a few weeks later, very asupiciously while we were in the middle of planning a trip to Paris. Given that Perec’s book was about Paris and only 47 half-sized pages long, I made sure to read it before leaving. It was surprisingly powerful and impressed me enough that I wanted to visit the site where it takes place. I’m even thinking that it would be a great book to assign in an anthropological field methods class. 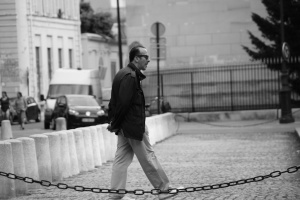 “A man walks by with his nose in the air…”

I had never heard of Perec before encountering An Attempt, but did learn a bit about him on the Internet. He died young at 45 years old. His writing styles are wide-ranging and innovative. A member of an experimental writers group called Oulipo, Perec wrote a number of fascinating books under unusual writing constraints.  For example, his book La Disparition, translated into English as A Void, is a 300-page book written without ever using the letter “e”. He is most famous for Life a User’s Manual, a 500-page book that takes place in a single apartment block at roughly the same moment in time: 8:00 P.M. on June 23, 1975. I have not yet read either of these books, but I have received them by interlibrary loan and I hope there is still enough time left this summer to dig into one or both of them.

My first reaction to hearing about Perec’s experimental books was “why?” Why bother writing a book under the constraints of not using the letter e? Why write a book that takes place at a single moment in time? According to the Wikipedia entry on Oulipo, the constraints were used to “trigger ideas and inspiration.” I was intrigued, however, by what I see as a distinctly anthropological sensibility in Perec’s experimental literature. We all function under the arbitrary constraints of cultures into which we were arbitrarily born and we are continually translating and communicating our personal/affective/physical experiences through the arbitrary rules of language. Why not add an additional constraint such as not using words with the letter e? The fact that Perec succeeds suggests the plasticity of our interaction with the world around us.

I am, however, more interested in his longer book, Life a User’s Manual, which takes place at a specific moment in time. We are often so busy in our own heads, thinking about our own lives and the activity in our immediate vicinity that it takes effort to pause and imaginatively reflect on the fact that in any given moment everyone else on the planet is also doing something. For those who do social research, the awareness that everything is always already going on can be a frustrating limit on our ability to observe, interpret and understand.

As many anthropologists have observed, the “results” of fieldwork are always partial. Of course, that doesn’t mean that the desire to represent a totality isn’t a real one. I have often felt that the increasing power and sensitivity of our representational tools—computers, recorders, and cameras—and their growing storage capacity—64K, 256K, 4GB, 32GB, 2TB—entice us with the promise of “getting it all.” As I describe in a blog I wrote about visiting the Mona Lisa, tourists often use their digital cameras like visual vacuum cleaners, collecting everything they see with increasingly sophisticated devices on massive storage cards.

This leads me to Perec’s slim book, An Attempt at Exhausting a Place in Paris. In it, he sets out to totally describe a place—to represent it in words—so completely that it is exhausted. The place is Place Saint Sulpice in Paris. Perec’s method is quite simple, on three different days he sits down in cafés, tobacco shops and in the park around the Saint Sulpice Square, sips coffee or wine, smokes cigarettes and writes. He attempts to record everything he sees. The result is a simple, fascinating, frustrating and ultimately sublimely poetic book that I really enjoyed.

If you are expecting prose, you will be disappointed. Like a fieldwork notebook, each section of the book begins with the careful noting of the date, time and location: “DATE: 18 OCTOBER 1974. TIME: 5:10 PM. LOCATION: CAFE DE LA MAIRIE.”

Perec then records every detail he observes—every passing bus and car, every pedestrian and pigeon, every texture and color. The book reads as a series of long lists:

A little girl, flanked by her parents (or by her kidnappers) is weeping
A bus (Globus) three-quarters empty
A lady who has just bought an ugly candleholder goes by
A small bus goes by: Club Reisen Keller
Bus. Japanese.
I am cold. I order a brandy
A car goes by, its hood covered in dead leaves

Beginning with careful attention to the “Tens, hundreds of simultaneous actions, micro-events, each one of which necessitate postures, movement, specific expenditures of energy…” (10). Perec carefully records  everything that he can. Even as he single-mindedly observes and documents, however, Perec soon realizes the limits of such an exercise as described in parenthetical comments,

“There are only two mopeds still parked on the sidewalk in front of the cafe now: I didn’t see the third one leave (it was a velosolex) (Obvious limits to such an undertaking: even when my only goal is just to observe, I don’t see what takes place a few meters from me: I don’t notice, for example, that cars are parking)” (15). 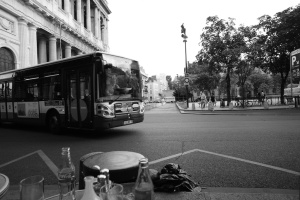 The repetition of events and activities—”An 86 passes by. An 87 passes by. A 63 passes by”—becomes frustrating, and the author responds by restlessly switching locations and time of day. Ultimately a sense of melancholy slips into the text as the author resigns himself to the fact that he is unable to record everything. One might say that by the end, the unachievable desire to representationally exhaust the place has exhausted the observer.

I found the affect of reading An Attempt at Exhausting a Place in Paris, to be unexpectedly profound. My initial skepticism at reading the repetitive list slowly gave way to an awareness of how our everyday lives are filled with common events. In spite of our ambitious plans, grand theories and shared ideologies—the everyday we actually experience is largely one of the same busses passing and the same micro events occurring and reoccurring over and over again. As I read, the droning repetition of mundane events morphed into a lyric mantra of the everyday—the rhythmic chant of a Parisian street. Perec’s book is not about the grand, the famous or the outstanding, but the ordinary, the everyday and the stuff-that-happens-while-we-aren’t-really-paying-attention. Or, as he himself describes it, “what happens when nothing happens.”

Anthropologically, Perec’s book captures the impulse to describe and record social life and the impossibly of getting it all. It also suggests that we might pay more attention to the vast majority of our lives that happen without us ever really noticing it.

I enjoyed the book so much that I wanted to visit the square where he wrote. Since we just happened to be leaving for Paris, I had the luxury of not needing to wait. Within a few days after reading his book, my wife and I made our way to Place Saint Sulpice and sat in the front row of chairs at Café De La Mairie where we enjoyed a light meal. Since Perec had carefully recorded the date of his observations, I knew we had arrived 38 years, 2 months, 17 days, and about seven hours after him. While two other places he made observations, The Tabac Saint-Sulpice and the Café La Fontaine Saint-Sulpice, are gone, I imagined that the everyday activity of the square and street unfolded in front of us much as it had for Perec. Just as he had described, pedestrians walked holding packages, bags, baguettes, dog leashes and the hands of children. Cars rushed past. Bikers biked and our field of vision was intermittently blocked by the steady stream of busses passing in front of the café. I saw an “87 going to Champ-de-Mars,” some “Japanese tourists” and even a “man walking by with his nose in the air.” I saw these everyday things in a subtly new way.