“It allows one to read it, to be a solar Eye, looking down like a god.”

A few weeks ago, while making plans for a last-minute trip to Paris, I spent some time working my way through the long list of possible things to see and do on a trip of about eight days. My wife and I were going to count on Rick Steves to get us through the basics—The Louvre, Versailles, The Eiffel Tower, etc—but I really wanted to take advantage of the trip to see things related to my academic interests. Since I teach about travel, museums and exhibitions there was plenty to fill most of the days—some of which I will blog about here.

Many of the thinkers and theorists who have most influenced me are French. So I thought visiting Paris might be a great opportunity to visit some of their graves to pay some respects. I discovered, however, that most of the memorials I was interested in visiting—Claude Levi-Strauss, Roland Barthes, Michel Foucault, and a few others—are unfortnately in other parts of France. The famous ethnographic filmmaker, Jean Rouch, is buried the furthest away, in Niger!  Only the sociologist, Pierre Bourdieu, was easily found at Pere Lachaise.

The grave I wanted to visit most, however, was the one that I could not easily find—the grave of Michel de Certeau. De Certeau remains one of my favorite thinkers and I return to his evocative writing quite often. Portions of The Practice of Everyday Life are central to my Pilgrims, Travelers and Tourists class, and this past spring he even inspired a unique campus activity. Michel de Certeau on Wikipedia mentioned nothing of where he is buried and websites such as Find A Grave, which quickly reported the locations of other people, returned no results.

I found a very nice biography of De Certeau in English on a Jesuit website, written in 2006 by a Luce Giard in the History Department at the University of San Diego. I checked quite a few other sites and tried a variety of search terms, but had no luck finding any information about the location of his grave. Eventually I got a hit on a French website that had a version of the biography written by Giard. At the end of the French version, however, Giard briefly mentioned DeCerteau being buried at a Vaugirard Cemetary in the 15th arrondissement of Paris. (Since I speak no French, I pushed the page through Google Translate to get the general idea what it was about.)  I couldn’t confirm that De Certeau was there, however. His name wasn’t even on the list of well-known people buried there.

In the afternoon of our third day in Paris we took the Purple Metro Line 8 toward Balard station and got off one stop short of the end at Lourmel station. After exiting we emerged on the Rue de Lourmel and followed it southwest until we reached Rue Vasco de Gama. Since the French vacation season was just beginning, the streets were quite empty. The only people we passed on the street turned out, very unexpectedly, to be a Japanese family out for a walk.

Most of the stores were closed except for a small cafe and a small local convenience store. After a short distance we turned left on Rue Lecourbe passing an organic food market and a hardware store. We took a moment to enjoy the fact that the hardware store was called Bricoleour. (Thanks, Levi-Strauss!)

A short distance further up the road the buildings along the left-hand side met with a stone wall, and a gate. A small sign said Cimetière de Vaugirard and beyond the gate was the open space of a small cemetery. I’m not sure what I expected, but I was surprised by how small it was. It was tightly hemmed in on three sides by six and seven-story apartments that looked down on the collection of graves and crypts.

Walking into the cemetery I stopped at the small office to inquire about De Certeau’s grave. Of course, with my non-existant French, when I say “inquire” I really mean is “lots of non-verbal communication punctuated by a smattering of mispronounced words.” In fact, when I asked the couple in the building if they spoke any English, I said “Inglés” not “Anglais” giving them the Spanish for English and not the French. No wonder they looked confused.

The couple was kind and patient and clearly understood that I was looking for a grave at their cemetery. A spurt of communication occurred when the older man asked, “Is he a personnalité?” I replied yes, and felt victorious when the woman behind the desk opened a drawer to retrieve a map of the cemetery with a complete list of the famous people buried there. After grabbing the map, I made a quick scan of it only to be disappointed that he was not listed among the names.

Pulling out my pencil and notepad I wrote Michel de Certeau in the clearest handwriting I could muster and handed it to the woman. She then entered it into the computer behind her desk. There was an exchange in French between the man and woman followed by a question in English to me, “Is he a religious man?” There was someone with that name buried at the cemetery.

The older man asked us to follow him outside as he led us to the site. It didn’t take long. The grave was just a few hundred meters down the central road and one row in. When he pointed to the gravestone, at first I was unsure what I was looking at. There were two stone crosses side-by-side with what appeared to be two graves. “Hic Jacent in Spem Ressurectionis” was carved in Latin beneath each cross (according to Google Translate this means “Here Lies The Hope Of Resurrection”).

Taking a closer look, however, I saw that what I had assumed to be individual graves had plaques with multiple names engraved on them. It appeared that he was buried with other Jesuits in a shared grave in the cemetery. Beneath the cross on the left, on the leftmost plaque, the fifth name on the list read “Michel de Certeau 1925-1986”.

It was kind of an awkward feeling to find the simple grave of a person that I had never met, in a small cemetery located in an average neighborhood in an unfamiliar city. I had no connection to the person, his language, or really any of the details of his life. In fact, I have only seen a few small, grainy photos of him on the web. Yet I have read quite a few of his books and regularly reread them with my students in class. When we discuss his ideas in class—and struggle together with the obscure parts—I feel that we must know something about him. I felt strangely guilty that I didn’t bring any flowers. But, it seemed equally strange to give flowers to someone you have never met. I was still in high school when he died in 1986. The flower store near the cemetery was closed anyway.

I took a moment to reflect on the strange awkward feeling I had. Then we did what tourists always do when confronted with things they only half understand—looked around and took some photos. I imagined that finding his grave would be a good blog post (a better post, however, than this one.) Perhaps others would go to visit him and then the cemetery would at least add his name to the list of personnalités!

As we turned around to go I continued to think about the little cemetery in the foreign country and the grave of someone I never met but still seemed to know. I imagined all of the people living in the apartments alongside the graveyard—living their everyday lives right next to the remains of hundreds of strangers. I promised myself that when I get back to the US I would read the second volume of The Practice of Everyday Life.

Most memorably, however, I was intrigued that the grave of a man who wrote, among many other things, about strategies of control and resistance could not be easily found among the millions and millions of websites and records that Google tracks. He was off the grid. Quite appropriately, the location of his final resting place didn’t pop up as a the result of a quick web search—it involved a narrative of walking in the city. 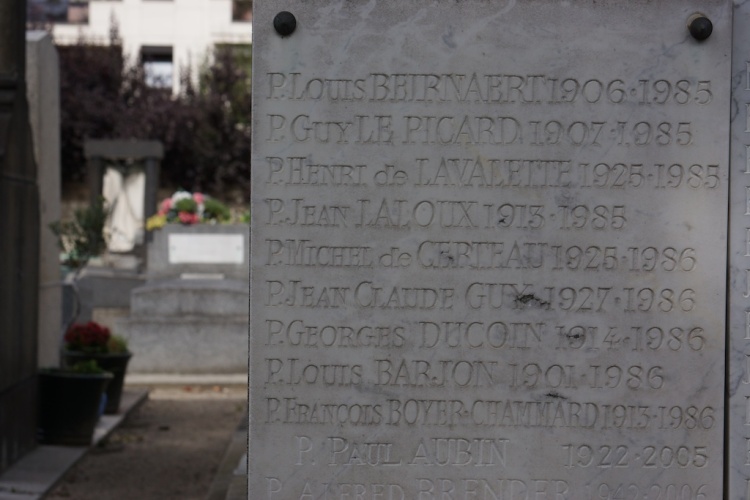