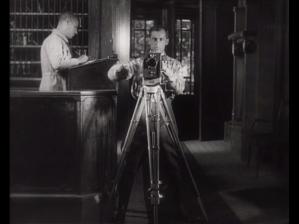 This week the anthropology senior seminar moved from still images to moving pictures. We began reading Anna Grimshaw’s book, The Ethnographer’s Eye: Ways of Seeing in Modern Anthropology, with her opening chapters on early film and ethnography.  At the same time we waded into David MacDougall’s chapter “The Body in Cinema” in his book, The Corporeal Image: Film, Ethnography and the Senses.  To these written texts, we added early short films by the Lumière Brothers.  The primary film we used to begin our discussion was Dziga Veritov’s, Man With a Movie Camera (1929).

The goal of this first week of film was to examine the different issues of body, presence, time and narrative that are associated with film. In addition to touching on the history of film in anthropology, I was particularly interested in discussing the observational eye of the camera and juxtaposing it with the idea and affect of montage. Grimshaw’s discussion of the critical uses of montage was particularly interesting and useful.  Veritov’s film provided an excellent contrast to the film we watched during the second half of the week, Robert Flaherty’s classic Nanook of the North.

In our discussion of Veritov we touched on the fascinating ways that he used his camera to isolate and record human movements, while relying on montage to contrast them with mechanical motions. A particularly memorable montage, for example, was the juxtaposition of womens’ hands packaging matches with mechanical packaging machines. Another, was the “life montage” which spliced scenes of a woman in labor and giving birth with scenes from a funeral and a wedding. I was, however, most impressed with scenes toward the end of the film which represented musical instrumentation and hearing recorded music. Through montage and film effects, Veritov actually tried to visually represent sound in a silent film. The speed of the cuts and the interesting content translated well into the visual culture of a 21st century group of Americans used to a high level of visual stimulation.

Veritov’s film was striking for its level of technical innovation and for its evocative material. His camera captures the lithe bodies of athletes, the disorienting rush of urban traffic and the labors and relaxation of workers. He does so, however, while foregrounding the presence of the camera. Rather than erasing the recording device, the filmmaker and his technology are visible throughout and we are impressed with the lengths to which the filmmakers go to capture their content. I particularly enjoyed when he carried his camera to the seashore and bathed next to it. 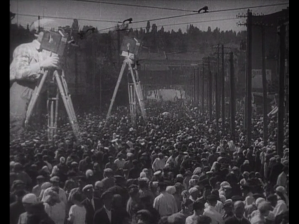 Veritov’s film also, however, hints at sinister uses of film for surveillance anticipating the mechanical observation of social life. Cameras without operators come alive and the eye of the cinema subjects the public to its gaze. While watching the film I was struck by the prescient images of cameras watching crowds of people—some with operators and others without.

His film did a marvelous job offering the exhilaration and enjoyment of watching a film while also keeping us connected to the reality of the apparatus that provided us with the moving images. The film, combined with the readings made for an excellent introduction to issues of film, documentary, and its subjects.

Grimshaw describes Flaherty’s Nanook of the North as being filmed with an “innocent eye” and, indeed, it was quite a contrast with Man with a Movie Camera. In class we discussed the ways that Flaherty’s camera was largely hidden from view, silently recording “reality” as produced and performed for it. The compelling story of a family “struggling for survival” in a harsh environment was easily recognizable to an American audience and many in class commented how strong the emotional effects of the film were. We observed that Flaherty’s scenes of Nanook and Nyla’s child had a strong emotional impact. (Of course, any film with babies and puppies is bound to have an emotional impact!) 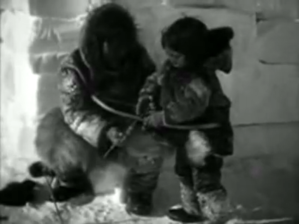 We discussed at length how the emotional familiarity of Nanook’s lifestyle as portrayed in the film fostered a sense of a “human connection”—regardless of the amount we actually understood about his life or the historical context of the film. We critiqued this affect and left open the question of its value in understanding others through film. Did it mean anything to “feel connected” to the subjects of the film even if all we really knew were a handful of details about how they live.  The film gave no insights into Nanook’s world or how his world relates/ed to the world of the camera and the man behind it. Clearly we will return to many times over the rest of the semester.

This semester the class is not only reading about film. We are also making films as pedagogical experiments. Last week we read and discussed photography, and completed a short class presentation on photography. This week, we moved from photography to silent, black and white films, so our assignment tracked this movement. The assignment was to film and edit a five-minute clip about a subject and deliver it in dialogue with our conversation about Veritov’s Man with a Movie Camera. To do this most folks used Flip Video cameras.

As with the previous assignment, I asked folks in class to complete this project with an eye toward using it to explore topics and issues that might work for our group project.  Since I am still very interested in the Snelling-University intersection, I chose to focus on it. In my film I decided to try a bit of montage, but to focus my film clip on the movement of traffic—cars, busses and people—that move through the intersection by the thousands every day.  I tried to juxtapose these modes of movement with the relatively silent spaces of alleys and empty buildings that are just off the busy streets. I also tried to take advantage of the unique perspectives cameras can give, while maintaining some sense of awareness of the filming process.

My film is, University at Snelling (Man With a Flip Video Camera):