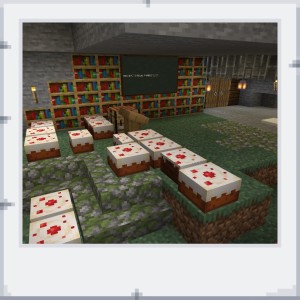 This year my birthday happened to land on the same day as our digital anthropology class. This turned out to be a great opportunity to make a point related to some things we have been discussing in class concerning the nature of digital objects: How are the virtual objects different than actual physical objects but still real?

Well at some point when I wasn’t paying attention a person or persons in the class festooned the area around where I stand in the classroom with small digital cakes—birthday cakes. At first when I saw them, I didn’t recognize them as cakes, but when I did I smiled at the thought. Then one student said that I should go outside our cave classroom to see what was out there. Written in giant letters made of the same cakes were the words “HAPPY BDAY!”

Gosh, that was so sweet! 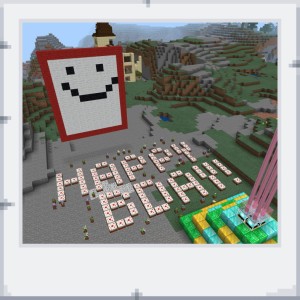 Of course, this exchange proved a point that we have been circling around for the past few days about the reality of digital objects. The cakes didn’t need to be edible or unique or made of flour and egg and sugar to communicate birthday greetings—to communicate human sentiment. In fact, the fact that they are each exactly the same and that copies can be created at no cost made it possible to use them in novel ways—creating something that would be difficult to craft in the physical world—”HAPPY BDAY” in birthday cakes.

So are the Minecraft birthday cakes real birthday cakes. The answer must be, “Yes, of course, they are!” They were given on a birthday, signified “happy birthday,” and were gifts in the spirit of the moment. Of course they aren’t the same kind of cakes as those in the physical world. For example, they aren’t edible and only come in one shape. But, in lots of cases I can imagine someone not eating birthday cake on their birthday—and that makes it no less real. And, in a sense, couldn’t we see the “single-style” virtual cakes as just an extreme example of the fact that lots of cakes are designed by others for consumption. Just imagine going shopping at Costco for a birthday cake and only finding one design. Not ideal in a market economy, but that doesn’t lessen the fact that it’s still a birthday cake.

One additional thing that I should note in this brief post is something I’ve been noticing since we started the Minecraft class. Students spontaneously create and contribute to the world in ways that they don’t, won’t, or can’t in the physical world. I’ve been teaching for 18 years and never once has a student given me a birthday cake. This year a student or students put over a dozen of them on the floor in front of me in the classroom and then snuck out to spend time writing greetings on the ground. This kind of behavior is interesting to note and I look forward to talking more about it with students in class. It seems, however, that something about the context of Minecraft has led to examples of a digital generosity. Perhaps it is because there is no scarcity in Minecraft, or because the student(s) have abilities and confidence in the world and want to demonstrate it. I don’t know, but at this point it is just worth noting.