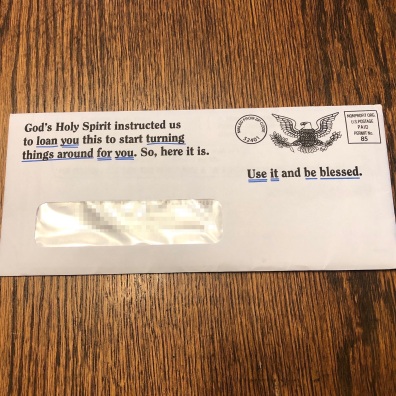 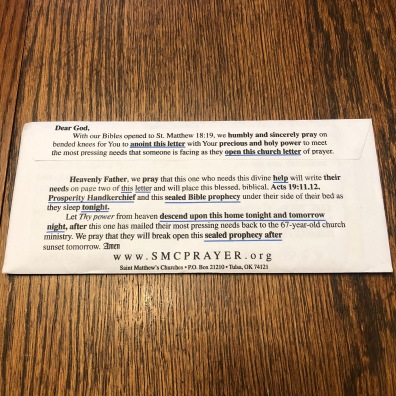 Yesterday the mailman delivered an amazing mystery object right to my door. The moment I saw the envelope I was captivated. The outside of the letter informed me that the Holy Spirit had instructed someone to loan me something inside that would “turn things around for me!” It was something that I could use that would bring blessings. The back of the letter actually had a prayer printed on it that made reference to divine power, and a sealed prophecy in it that I should open the next day at sunset.

The letter, from an organization called Saint Matthew’s Churches (www.SMCprayer.org) is is easily the most interesting piece of mail that I have received at my home in ages. Clearing a table, I carefully opened the letter and documented its contents. 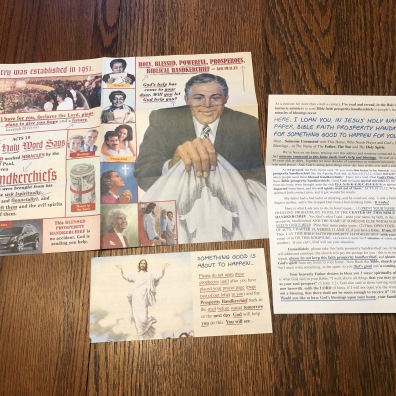 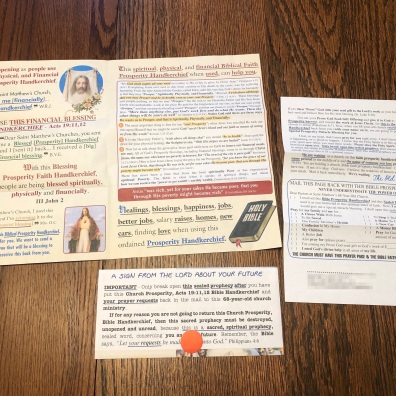 Inside it contained printed material filled with images and quotes discussing the power of the “holy, blessed, powerful, prosperous, biblical handkerchief” that can work miracles. It featured images of money, healed people, success, objects of wealth and prosperity. It included a paper facsimile of a handkerchief and and a two-page letter that explained what the handkerchief was and how it is to be used.

Finally, and most mysteriously, there was a folded and sealed letter with a picture of “white Jesus” on it. Text on the outside it said that it was “A Sign from the Lord About Your Future”—a sheet with prophecies in it that I shouldn’t open until I have completed the preparation of the prayer page and the prosperity handkerchief and placed it in the mail before sunset on the next day. An important notice on the outside instructed me to destroy the sacred prophecy unopened and unread if I don’t complete the instructions and mail the handkerchief back. 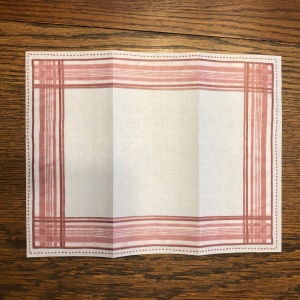 Are you kidding me! The letter was absolutely cool. I’ve never received a holy prophecy in the mail and especially one that involved completing a sacred task before sunset the next day. Most importantly it had an interesting aspect of the gift to it. The handkerchief was explicitly lent to me to be returned after completing a required ritual.

Well, you don’t give a spiritually empowered object—even if it looks like junk mail—to an anthropologist and not expect that they won’t follow the rules. So this afternoon, before the mailman returned to my home I read over the materials and followed the ritual. (I made some minor adjustments to avoid getting on their mailing list. I assume that God also would avoid getting on mailing lists.) 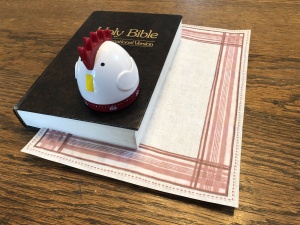 Then the instructions presented the real magical moment:

As soon as the timer rang I promptly followed the instructions to fold up the handkerchief and the attached prayer sheet and put them in the prepaid mailing envelope. After sealing it I put it outside for the postal carrier to pick up this afternoon.

About an hour ago the mailman came and picked up the sacred return letter. Now, with only a short time until sunset, I am waiting for my chance to open the sheet of prophecies. 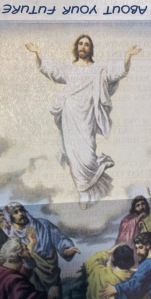 So shortly after dinner last night, with the sun already set, I prepared myself to open the sealed document containing “a sacred, spiritual prophecy.” On the outside an image of the familiar bearded “white Jesus,” with his arms spread appearing to people (his apostles?) welcomed me.

Upon opening the document I was struck immediately by the fonts, capitalization and underlined content of the page-long text. Framed as a text of Holy Spirit-inspired words—presumably by a member of the church—the text was WRITTEN IN MOSTLY ALL CAPS with various BOLDED SECTIONS and many parts underlined in red for emphasis. Some were BOLDED AND UNDERLINED for no reason that I could understand.  The opening text informed me that people want spiritual guidance, but are looking in the wrong places. They need to look to God. And, that prophecy is not given to “make people curious” about the future, but to “motivate them.” Then the prophetic section began with, “MY CHILD…” and continued for three-fourths of a page making the following basic  points:

So, my takeaways from this were: Time is short and there are things to do. Things need to change. I have the power, but need to figure out how to use it. As I learn to use my power people will notice. Regardless, God is working on things too, but will only tell me the full story in installments. This is going to be great, but I’m going to need to regularly sew my seed. In the context of the prayer letter that I sent yesterday, “seed sewing” refers to giving a cash donation.

So, this was personally a bit disappointing, because I was expecting a bit more in terms of the prophecy—especially given the ritual of the handkerchief. Also, the writing and style of the prophetic text sounds much closer to the label on a bottle of Dr. Bronner’s Magic Soap (I found a copy of the original text here) than a revelation from the almighty. 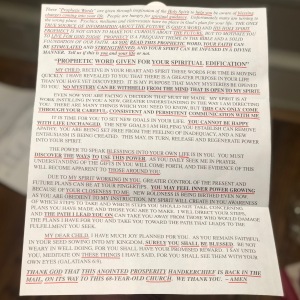 Up until just now I have pretty much taken this letter at face value as an interesting (albeit a bit kooky) mystery object. I took a brief break to look up a bit about the church and these letters on Wikipedia and was fascinated to learn that this organization, Saint Matthew’s Churches,  is an evangelical revivalist “church by mail” that was established in the 1960’s by a Reverend James Ewing. Apparently they target their letters using census data and are accused of preying on low income and elderly people. Also, according to this post, apparently if one returns the letter they are opened up to a never-ending stream of mailed appeals for “seed donations” of money.

Evangelical believers aside—because I assume they would recognize this and immediately  believe or dismiss it based on their belief system—how might it be received by others? Looking online I imagine that most just throw it away as junk mail. While I suppose if one is a stereotypical “lonely old person” or “low income person” who needs their life turned around, the mailings images and promises might entice a few. Still, however, the hokey graphics and poor grammar and writing style certainly signal that something is amiss. I found lots of folks online who joke about the letters or dismiss the correspondence outright as a “scam.”

Certainly, however, the letters on some level must be effective or they presumably wouldn’t generate millions of dollars in revenue for the church. (This is assuming that the people who work for the church aren’t simply believers who are bad at marketing.) So how about some observations on how this letter might function:

Yes, in the end I was disappointed by this whole thing, but the purpose of Mystery Objects is the curious sensation that they evoke and the opportunity to try and see things from a different perspective. In this sense, the Bible Faith Prosperity Handkerchief was a success!

(I’m just glad that I didn’t return it with any personally identifiable information on it. One letter from them is enough!) 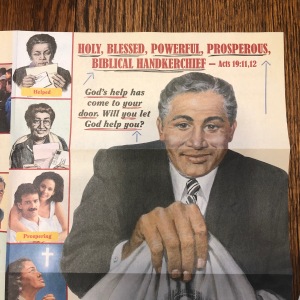