“In fact, instant noodles may well be the most successful industrially produced food, at least in terms of world penetration: they constitute a huge social reality—and one inviting attention. Much like sugar, instant noodles are a capitalist provision that provisions capitalism…Because they feed people quickly and cheaply, they appeal to busy and economy-minded people everywhere” (Errington, Fujikura and Gewertz 2013: 6).

This last week our Good Food First-Year Seminar finished reading The Noodle Narratives: The Global Rise of an Industrial Food into the Twenty-First Century by Frederick Errington, Tatsuro Fujikura and Deborah Gewertz. The book traces the path that humble instant ramen took to become a globally ubiquitous and quotidian food across various culinary cultures and social classes—even in places that do not have a noodle-eating traditions. The authors’ central argument is that ramen is a “capitalist provision that provisions capitalism” by feeding workers a quick, cheap and filling meal and in some places literally serves as a gateway industrial food product creating new classes of consumers.

Like ramen itself, The Noodle Narratives is straightforward and accessible to undergraduates. For this reason I chose to include it in the syllabus for my first year seminar where it serves as a bridge between the popular press books we have read in the first half of the semester and the more academic and specialized essays we will be reading in the final month. It introduces some foundational anthropological concepts without excessive specialized jargon, and the case studies examine the interrelations between food, class, capitalism, taste and culture. The book offered many interesting contrasts and moments of discussion when put in dialogue with Michael Pollan’s positions on local food (Omnivore’s Dilemma) and James McWilliams’ concern with the challenges of feeding the world and environmental issues (Just Food).

“…instant noodles are well suited to capitalist provisioning not only because they are inexpensive to produce on an industrial scale but also because their physical properties appeal to a great many hard-wired human gustatory and olfactory pleasures” (11-12).

The book also begins with a straightforward discussion of the relationship between biological predispositions for specific flavors and the cultural context in which they are embedded. Noodles and palm oil fill the stomach; the salty and savory tastes of the flavor packet tingle the tongue.

Reading about ramen, however, makes one hungry. A few folks in class observed that as they read they craved ramen as a snack—a gustatory spell to which I also succumbed. So this past Wednesday we gathered for a second time as a class for a meal—to eat ramen together.

Errington, Fujikura and Gewertz observe in their book that that a primary reason for ramen’s great global success is the way that it provides simple, cheap and quick pleasures and can be subject to such a wide variety of local elaborations. To demonstrate the various elaborations of ramen across different food cultures the class chose to be divided into six groups of three—each tasked with locating a ramen recipe from a different part of the world: Japan, the U.S., China, SE Asia, South Asia, and South America. 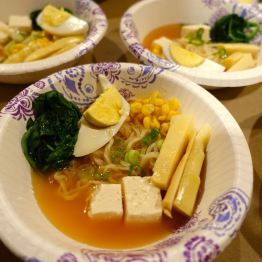 On Wednesday night everyone gathered together around the big table and the different groups took turns in the kitchen preparing their specific ramen dishes to serve to the class. After eating everyone commented on the food and guessed where it was from. It ended up being quite a logistical feat to manage all of the groups, but the pause between courses offered an opportunity to converse and relax.

Our class meal demonstrated the ease with which simple industrial ramen could be elaborated upon—resulting in a wide variety of “local” flavors. Soy Sauce and sesame oil easily gave the ramen a Chineseish flavor. Peanut butter and Sriracha pepper sauce transformed the same product into something with a taste that was Thai-esque. The meaty flavor of fried steak and carrots gave the noodles a Brazilian flair while adding garam masala and sautéed onions and tomatoes approximated the aromas of Indian cuisine. Two groups chose recipes that were in direct dialogue with the content of The Noodle Narratives. One chose to make Japanese Miso Ramen with miso and hondashi to give it a taste truer to the original food, while another group made their ramen with crushed Doritos and summer sausage—a recipe from Jail House Recipes.

Over the course of two hours the different dishes were collaboratively cooked and collectively consumed—the twenty assembled class members consuming 35 bricks of ramen in six different ways. Unlike our previous class meal which was quite pricey, this meal demonstrated ramen’s economical satiety by feeding all twenty of us for just a little over $60. This included the final coup de grâce: a ramen-made dessert—chocolate and butterscotch haystacks.

I’m pretty sure that none of us have ever, or perhaps ever will again, eat so many different types in one sitting. Needless to say, we all got very full.

“It would seem, hence, that anyone can find a variety of instant noodles that suits him or her; no one has a reason not to buy them” (129). 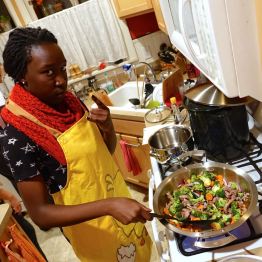 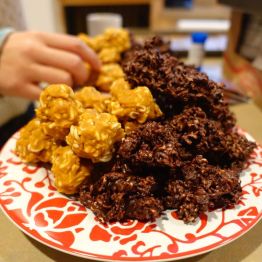