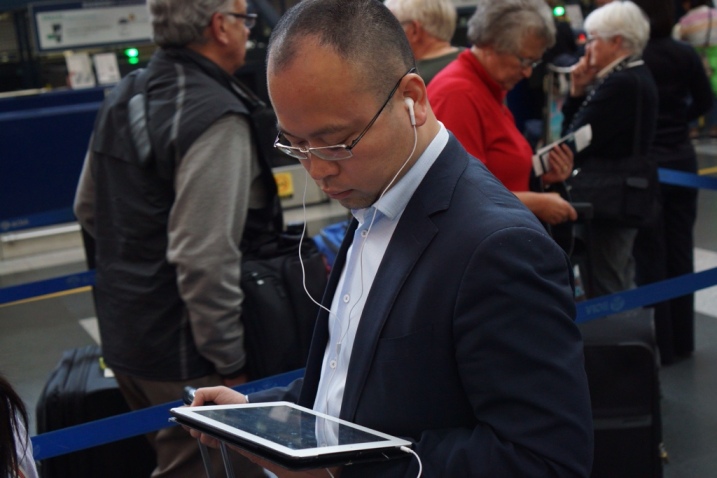 A distinct intersection of multiple capitals.

The other day while in the check-in line at the Beijing airport a middle aged man in smart business casual dress, with a modest rollaboard suitcase just also happened to be plugged into his iPad watching a Hollywood blockbuster. The bustle of the airport, the crowded checkin line, the juggling of luggage in one hand and the precarious balancing of an expensive, unprotected 4th generation 3G iPad in the other, made me cringe. A single unexpected bump or slip and the iPad would crash to the ground.

The man in the check-in line was just the latest example of what I have come to think of as the “public walking iPad.” Since my first trips to China in the iPad era I have noticed the way that iPads are conspicuiously carried around by some people in all manner of venues and at moments where their use as iPads seems secondary to their signal use as “iPads.” I have seen folks carrying them underarm in crowded streets and shopping malls—places where they are very visible and, it seems to me, easily damaged. In fact, the first time I noticed a “public walking iPad” it was because the owner was plugged in playing a video game with one hand while occasionally looking up to navigate her way through a packed shopping mall. My curiosity about the behavior was secondary to my fear for the safety of the iPad.

I am reluctant to interpret the “walking iPad” behavior without actually talking to one of its practitioners. Standing in line waiting to check in with nothing better to do, however, than think about what I was observing I found myself thinking of Bourdieu. Specifically, I was intrigued by the way that the man with the iPad was a singular point of overlapping notions of capital—standing in line for an international flight, clearly a businessman on a short trip (judging from his small amount of luggage), part of a social network of global business exchange, carrying an expensive object which represents not only a degree of economic capital but also the associations of connoisseurship that attach to a global brand like Apple. Furthermore he was watching a Hollywood blockbuster on the iPad—another educational moment in the lingua franca of global popular culture entertainment.

The iPad is more than just a physical object. It is a symbolic index and a gateway to sociocultural “content.” It is a thing and a mode of delivery. Like the fictional time traveling TARDIS of Doctor Who, the iPad is bigger on the inside than the outside. It is always more than what it seems. Similarly, the figure of the “walking iPad” is also always more than what he or she seems—like a time-space traveller who is both present and absent at any given location—a figure that is split between the here and now and the other places that the technology can deliver. The businessman was in line and not, he was receiving messages from Hollywood even as he was sending messages to everyone around him.

Of course, even as I considered this, I was also nervous that an unexpected jostle, slip, or bump would send his iPad crashing to the ground.

I’ll post other images of public walking iPads here as I take them: