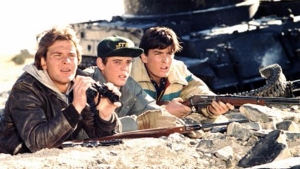 “They are Coming for US.”

As an exercise, I went through the trailers for both films and jotted down a list of events, images, and quotations that summarize each. I was surprised to discover how similarly the two trailers were structured.

Since I still hope to finish the Red Dawn post at some point, I am not eager to describe all of the similarities in an entirely new post. So, I thought I’d try something new, innovative and interactive. I have prepared a quiz followed by the two trailers. I think it would be fascinating to see how people respond to the quiz before seeing the trailer.

So, here it is. Half of the list is from the documentary, Death By China and the other half is from the fictional Hollywood film, Red Dawn. Try taking the quiz and then watch the two trailers and see how you did. No cheating!

OK, now that you have taken the quiz, here are the trailers for the film remake and the documentary: